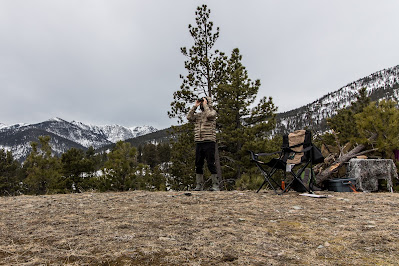 The 2022 Cave Knoll Eagle Watch spring migration survey begins on 20 February. Keep an eye out on the blog for the daily flight summary which will be posted in the evenings. Also, check out the cumulative flight totals on right side bar of the blog. I am looking forward to seeing what the results are from my new observation point. 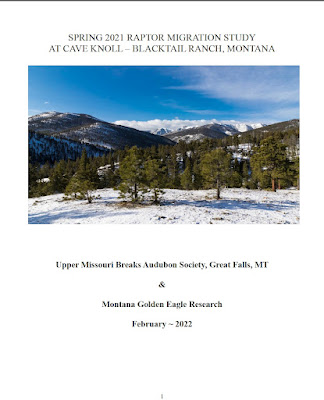 I just finished the 2021 Spring Raptor Migration Study at Cave Knoll Blacktail Ranch, MT report. If you would like to check it out it lives here. I am looking forward to surveying this spring again shortly. I am no longer emailing updates to the email list, so if you want to follow along with the effort the blogs are the only place to do so.

The 2021 Cave Knoll Eagle Watch report is nearly complete. I will upload a pdf of the report here when it is finished. Going forward I will no longer be emailing the group list updates or the report, so if you are still interested in following along with this now entirely volunteer effort please do so at the blog.

I have also decided to terminate the effort at Duck Creek Pass Eagle Watch. The reasons for that are mentioned on the Duck Creek Pass Eagle Watch blog here. As a result of only collecting two weeks of data and basically having nothing nice to say about the parties involved in last years doomed effort I believe it in the best interest of Montana Golden Eagle Research to not waist funds on writing a short report.

The 2022 Cave Knoll Eagle Watch spring survey will get underway shortly. I am really looking forward to determining if the move to another observation point will result in total migrant numbers more in line with the historic totals. I consider myself extremely fortunate to be working with a private land owner to conduct this research after my poor experiences last fall with HLCNF.

I have also started submitting the data from all of my volunteer efforts to the Global Raptor Information Network. We have hammered out a data sharing release, so it is good my data is being "housed" and shared by a third party going forward. I am impressed with how organized they are so far and how receptive and eager they have been to receive the data I have collected thus far.

With names like Eagleville and Eagle Peak in the vicinity of Surprise Valley it is no coincidence that there is a significant population of wintering raptors making use of this prime habitat in northeastern California. Below are two new routes that I will be surveying going forward.

The Cedarville North route is approximately 77 miles in length and follows the Surprise Valley Road north past Ft. Bidwell. My wife and I surveyed it this past weekend and we were impressed with how many raptors I likely missed during my first survey of the area back in December.

The Cedarville South Route is approximately 62 miles in length and follows the Surprise Valley Road south to the Nevada state line. I have found on my early surveys of the area that both ends of the valley show significant concentrations of wintering raptors.

This is one of three Winter Raptor Survey Routes out of the Alturas area. The first route in the photo above is roughly 74 miles. I will post the results of each route here after the surveys are conducted. If you are interested in the area surveyed click on the image above to get your bearings.

The next route is to the west of Alturas and is aproximately 80.7 miles in length. I refer to this one as the Alturas West route.

The third route out of Alturas is to the north along the Highway 395 corridor. It terminates near the California and Oregon state line. I refer to this route as Alturas North. The Alturas North route is approximately 71 miles in length.

I began working on a Winter Raptor Survey Route here in Washoe County Nevada three winters ago. It has yielded some interesting observations especially considering how quickly the habitat around Reno is being developed for warehousing or new homes. After driving through the Surprise Valley last winter I was blown away by how many perched raptors I spotted along the Surprise Valley Road along the west side of the valley. I reached out to the project coordinator whom I had been working with for three years on the Washoe County Route about the possibility of surveying the Surprise Valley and Alturas areas in Northeastern California. At the time the farthest north route in California being surveyed as part of the study was in Sacramento. The project coordinator replied that she was interested in adding the routes to their inventory. On 13 and 20 December I surveyed both routes. I was blown away to have detected 99 raptors on the Surprise Valley Route of which 14 were FEHA. I promptly entered my data into the data entry portal on 21 December, proud of what I had found. On 30 December the project coordinator notified me of another group out of Cedarville that now had wanted to survey basically the same route and that duplicating the effort wouldn't be a problem for their data set. She then mentioned I would have to coordinate surveying my route with this other party going forward as to not "double up" on the effort. I reached out to the other party about my intentions surveying the route and they responded by suggesting I focus my effort on the Alturas effort and asked my for my intended dates of surveying in the Surprise Valley should I choose to continue surveying there so as not to "double up" on the effort. I replied by saying I had no intention of terminating my efforts in Surprise Valley considering what I had seen thus far. I did provide dates for my next survey. At this point I never heard anything from the other party I was told to coordinate with and I noticed they had "doubled up" on the effort submitting data 2 days prior to my survey.

My issues with how this was handled are poor communication, lack of coordination from the project coordinator and the fact that doubling up on observer effort is a waste of resources. Since it requires a fair amount of money to drive up from Reno to the area and for lodging when my wife is able to join me, it is inconsiderate of our efforts thus far for three years to have two groups surveying the same route. Nothing was mentioned when I suggested the routes at the end of November so I am assuming this resulted from the project coordinator never looking at a map of the proposed routes.

While participating in Christmas Bird Counts at the Hart Mountain and Sheldon Refuges, the count coordinator mentioned a Winter Raptor Survey Project run out of Oregon. Info on that project may be found here. The project coordinator is a wealth of wintering raptor knowledge and his project is extremely well coordinated. If you take a look at the project map below you will notice how well spaced the routes are, which is important for assessing wintering raptor populations. After some productive back and forth discussions of the possibility of extending his coverage for the study into Northern California he sent along 5 proposed routes. Three of the routes are out of the Alturas area and two are in the Surprise Valley.

My wife and I surveyed one of the Aturas routes and one of the Cedarville routes this past weekend and we were impressed at how well planned the suggested routes where. I learned that just driving straight down the valley where I had seen the most raptors in the past is ineffective at accurately estimating the raptor population in a given area. These new routes are planned out using satellite mapping software to look for appropriate raptor habitat. Since the project was begun in the winter of 2004 I am fortunate enough to be pulling on the project coordinators 18 years of experience planning routes in Washington, Oregon, California, Idaho and Montana. The data collected thus far is so relevant that The Peregrine Fund reached out to him to see if he was willing to share it with them, which of course he was.

I highly recommend the project after having volunteered on two different projects. In the end the situation created by poor communication on the first project was advantageous in the long run as I am much more interested in how this other study is run and the data it is generating. Considering so little is known about raptor populations worldwide and so little area is currently being surveyed it is actually better not to double up on efforts. 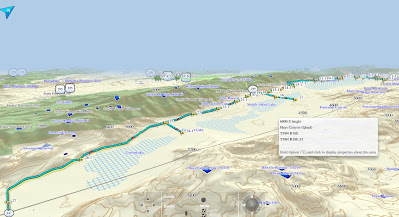 The Surprise Valley Winter Raptor Survey Route begins at the base of Long Canyon at the Northern end of Surprise Valley and continues 82 miles south to the California Nevada State Line. The route mostly follows the Surprise Valley Road along the eastern slope of the Warner Mountains. In three areas the route crosses the valley floor. There are 27 stops along this routes entire length.

Most of the valley is over 4,000 feet above mean sea level (AMSL), and could be characterized as a high altitude desert valley. A series of alkaline lakes occupy low-lying areas. Forested mountains mark the west side of the valley. The Hays Canyon Range, (mostly east of the Nevada state line) is to the east, and the Warner Mountains border the west. The valley is considered part of the Great Basin, a desert region roughly covering the geographic majority of Nevada. Most of the land west of the main north-south highway, Surprise Valley Road, is US Forest Service land. To the east of the road, most land is owned by the Bureau of Land Management (BLM). Recreational facilities on BLM lands tie in with the US Fish and Wildlife Service, Sheldon National Wildlife Refuge, Nevada (formerly called Sheldon Antelope Refuge). Along most of the routes length is agricultural and ranching land and two significant alkaline lakes. Where the route comes close to the eastern slope of the Warner Mountains juniper and Ponderosa Pine forest may be found. Near some of the old homesteads and communities of Ft. Bidwell, Lake City, Cedarville and Eagleville ornamental plantings and large deciduous trees may be found. In the winter months most of the agricultural land is fallow either dirt or stubble. Many of the irrigation systems and numerous telephone poles, power lines and large Fremont Cottonwood make for excellent perches for hunting raptors. 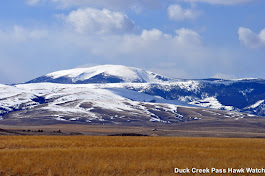 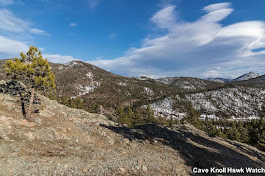 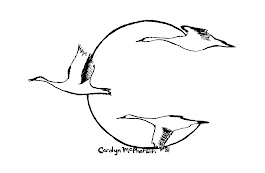 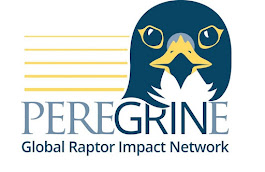